The history of the family 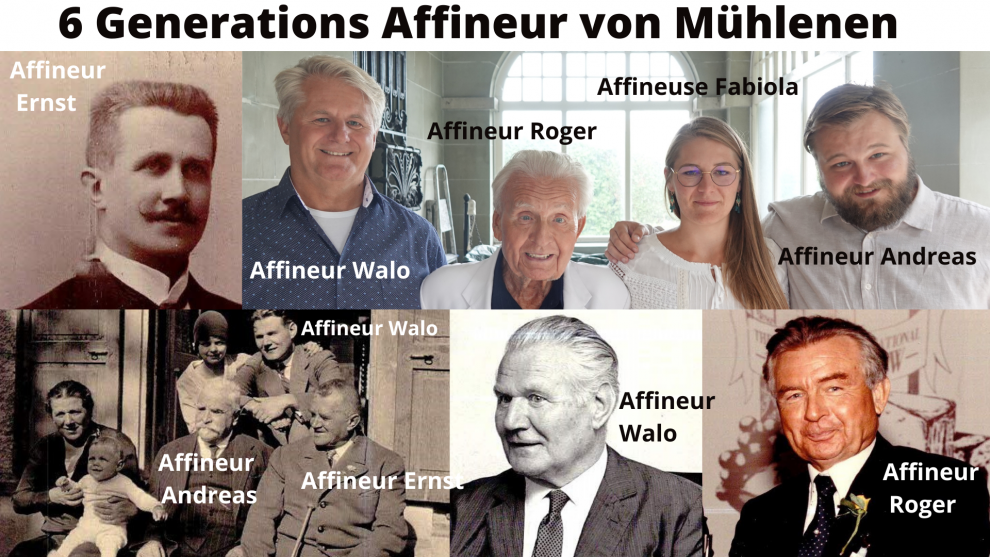 My family's story in cheese began almost 200 years ago. Andreas von Mühlenen (1845-1900) was the youngest son of Jakob von Mühlenen and he lived with his 7 siblings in Boltigen in the Simmental. Switzerland was a poor country and many young people emigrated. Andreas had as well already packed to leave Switzerland.

But then he met his future wife Magdalena and decided to stay in Switzerland. In 1867 he opened a food store in Bern. It was not an easy life they had 12 children, but only 5 of them reached adulthood. His son Ernst was supposed to take over the business, but he decided to go into the textile industry and the food store should be liquidated.

But then it was almost too late Ernst decided to join the family business. He was extremely interested in the up-and-coming cheese affinage and bought in 1909 an affinage company. The future von Mühlenen & Co cheese Affinage. His youngest brother Eugen joined him in 1916. Already at this time the cheese (mainly Emmentaler) was exported. In the books we could even find invoices to the Tsar.

Affineur Ernst had a stiff leg, which did not prevent him from driving car races and learning to fly. He had several accidents with the plan and the cares but was never injured. On day he went in cellar to look after his cheese and he fell down the stairs and broke his leg, shortly after this he died in 1934 of a pulmonary embolism. The company had several cars and airplane but no money and was bankrupt. His son Walo was forced by the debtors to liquidate the company.

But Walo was a fighter, he started to negotiate with the debtors and found finally a possibility to take over the company. He restructured it, created the brand “Affineur Walo family spirit 1867” guided the company through the 2n World war and expanded it after the War. But he was a little bit bored by the tight rules of the Swiss Cheese Union and started in the 1950s a chemical factory. At the beginning it was rather a hobby than a business, but it grew and Walo had increasingly to care of it. Meanwhile the cheese affinage was managed by his son, affineur Roger. Roger moved the company from Bern to Fribourg in 1970, shortly after the new building was finished Walo died in 1972. An a big fight among the heirs started, the siblings of Roger put the company on the market for sale.

But Affineur Roger did not give up and he started fighting in the last minute he managed to convince some investors and bought the company from his siblings. He then continued to expand the company and attached great importance to the quality of the suppliers.

In 1996 the Federal Council decided to dissolve the Swiss Cheese Union. Most of the cheese affineurs were merging their companies or dissolved them, the von Mühlenen LDT was going to follow this route. I, Walo von Mühlenen the son of Roger was working in large international companies and was about to accept that the company will disappear.

2011 the resurrection of "Affineur Walo"

But then my employer wanted to relocate me to Düsseldorf. I did not at all agree with this plan and looked out for a new Job. At the same time, I talked to my father, he thought that the company has no future. But I convinced him that we should try to continue. In 1996 I was appointed managing director in the 5th Generation of the von Mühlenen LDT. We had set ourselves the goal to build a strong partner for the Swiss cheese manufacturers, but we needed investors and were looking for partners to support us. In 2006 we found the perfect partner, they agreed to maintain the company independent and they wanted to invest in new affinage cellars and packaging facilities.

Unfortunately, we had to discover that it was the wrong partner. They did not invest and fired me and my 80-year-old father and merge the company. Our employees, customers, and suppliers, some of them have worked with my father for 40 years, were stunned. Once more the family von Mühlenen was left with nothing and was sued by the former partner. I have had enough of the cheese industry and started a new career in another industry.

But our customers and suppliers contacted me and plead me to continue. But to do so I had to find an agreement with the former partner. These negotiations were extremely difficult, and I was about to give up but finally we found an agreement. The Partner kept the company and the name von Mühlenen, and we got the brand «Affineur Walo Family spirit 1867» and the company Walo von Mühlenen LDT. This was the resurrection of “Affineur Walo” and of our philosophy “quality, reliable, exclusive”

With my knowledge and the experience of my father, we were able to seamlessly build on our earlier success. After just 3 months, we won 14 awards at the World Cheese Award 2012 and with three cheeses in the final round, we were again the most successful participants. Since then we have been expanding the Affineur Walo brand continuously.